Jeffrey Erik Perrine of Orangevale, CA, is a local far-right extremist who has become increasingly active in the patriot movement over the past year. Perrine is an openly anti-immigrant, racist, and transphobic Trump supporter. He has repeatedly attempted to disrupt liberal and leftist events in Sacramento, and has a history of harassing protesters and random passersby alike. Perrine frequently travels to participate in extremist rallies, including Patriot Prayer in the Pacific Northwest, the recent No to Marxism rally in Berkeley, and the MOAR (Mother of All Rallies) Trump rally in Washington, D.C. He has also been previously affiliated with the Sacramento Proud Boys, although they eventually kicked him out for being a loose cannon and a white nationalist. END_OF_DOCUMENT_TOKEN_TO_BE_REPLACED

Joseph Arrigo of Orangevale, California (a suburb outside of Sacramento) has been identified as a member of the alt-right group Identity Evropa (IE). Arrigo has been with the group since 2017, and has been documented attending their events and posting disturbing far right material online. END_OF_DOCUMENT_TOKEN_TO_BE_REPLACED

**The call-in campaign we issued on 3/27 has come to an end! We received confirmation that Jason Judd’s employment at Sun System Technology has been terminated. Thank you to everyone who participated in and supported the campaign! **

Jason Judd (alias Jason Kale) is a longtime Neo-Nazi and a member of the Golden State Skinheads (GSS). He is also associated with Hell’s Angels, the Traditionalist Worker Party (TWP), and the Hammerskins Nation. He was one of 20 GSS and TWP members who participated in the 2016 neo-Nazi rally at the State Capitol in Sacramento, a demonstration that was ultimately shut down by a mobilization of 400+ anti-fascist counter-protesters. END_OF_DOCUMENT_TOKEN_TO_BE_REPLACED

As mainstream media coverage of the anti-fascist struggle has skyrocketed over the last year, we’ve noticed that questions surrounding it have largely been confined to concern over a narrowly defined free speech. This has been accompanied by numerous, sometimes deliberate, misrepresentations. While narratives of violence have tended to be over-represented in accounts of anti-fascist and anti-racist organizing, reporting on the alt-right has been the opposite, downplaying the violence inherent to the recently re-energized white nationalist movement. Because clashes in Northern California between anti-fascists and white supremacists have captured so much media attention over the last year, we feel it necessary to place these incidents within their proper context. END_OF_DOCUMENT_TOKEN_TO_BE_REPLACED

END_OF_DOCUMENT_TOKEN_TO_BE_REPLACED

Between preparing for state repression and supporting our comrades as they fight their cases, Antifa Sacramento has had a lot to keep up with this summer. Now, with the Torch Conference fast approaching, we have more support roles to fill than ever. So, we’re excited to announce a new way that you can help us fill those roles and get some sweet merch out of the deal, too! END_OF_DOCUMENT_TOKEN_TO_BE_REPLACED 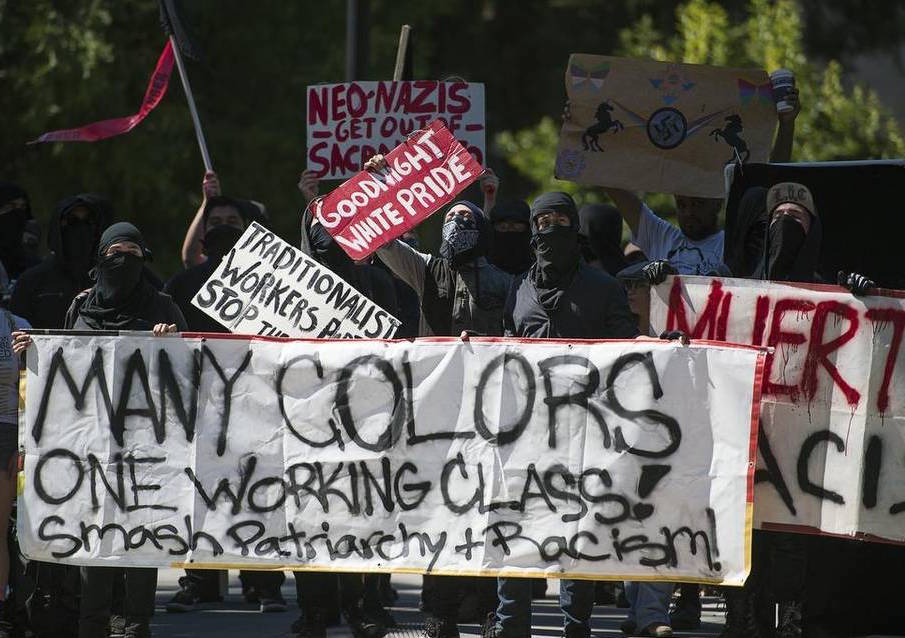 Ever since the successful shutdown of the neo-Nazi rally in June of last year, Antifa Sacramento has been ceaselessly preparing for the impending threat of state repression to come down on our community. Now, that repression has materialized in the form of a series of arrests targeting some of the brave individuals who risked life and limb to oppose fascism on State Capitol grounds. END_OF_DOCUMENT_TOKEN_TO_BE_REPLACED 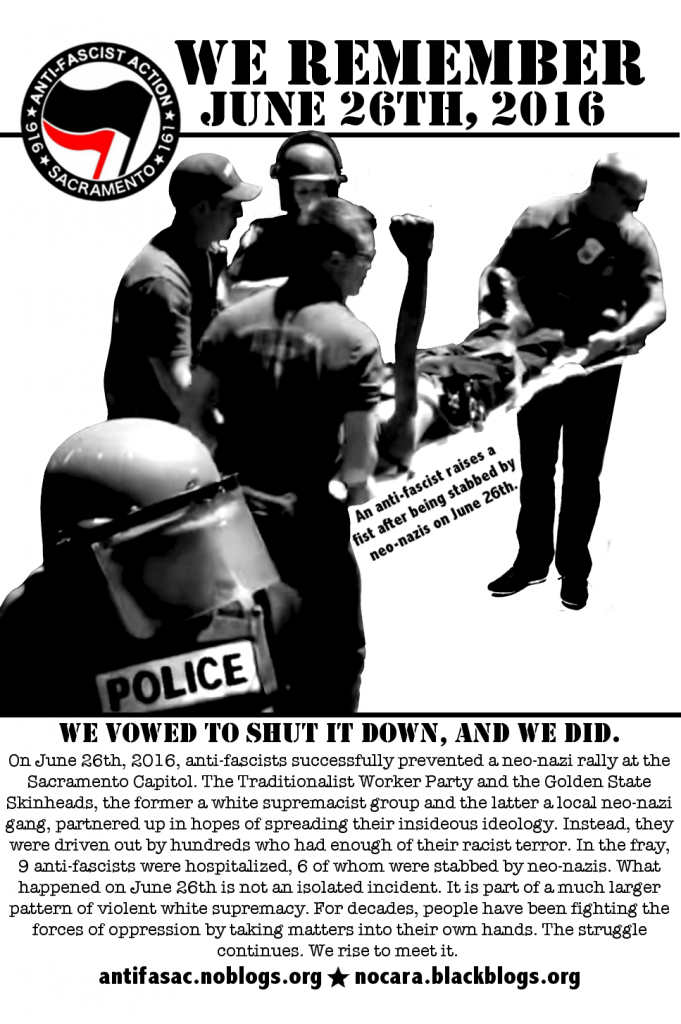 Join us in remembering the events of June 26th, 2016, when anti-fascists bravely prevented white supremacists from rallying in Sacramento, California. Despite a massive police presence and near-deadly stabbings by neo-nazi skinheads, people from all over Northern California held it down and ran the fascist scum out. Now, a year later, we are releasing a poster ready for you to download, print and distribute in commemoration of that day.   We honor the sacrifices of the past and look to the future with resistance and determination in our hearts. Together, we will continue to fight fascism and oppression. The struggle is far from over.

In unyielding solidarity with those working to expose and oppose fascism across the country and around the globe. We stand with you. 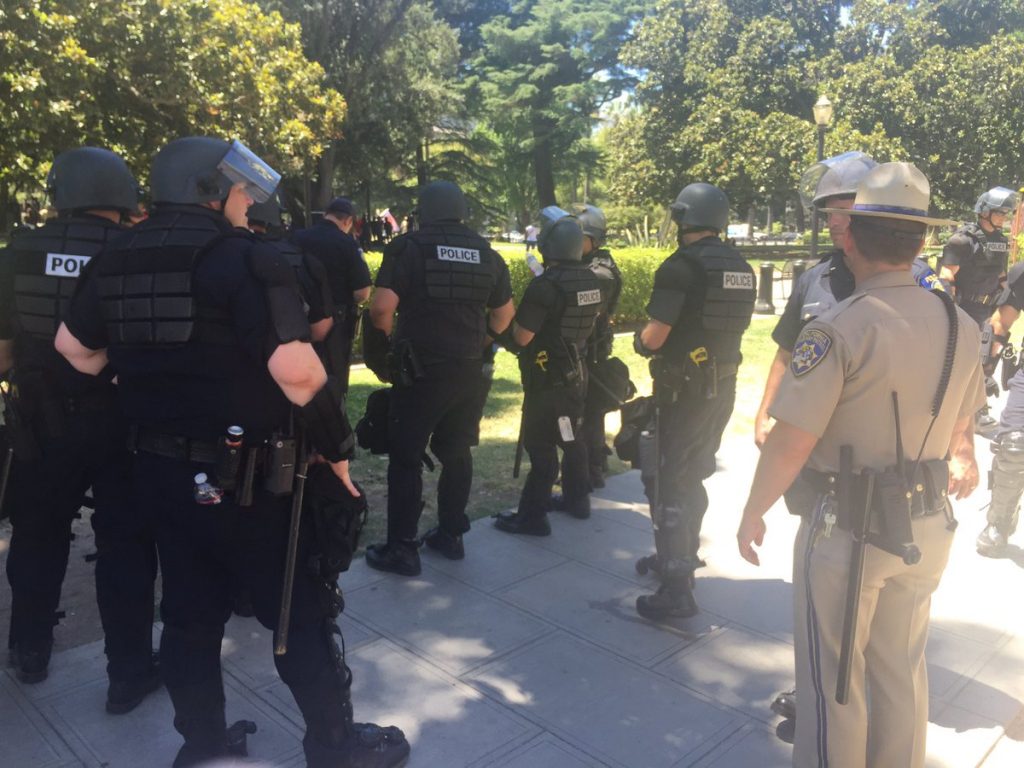 In early March, the California Highway Patrol completed its investigation of the anti-Nazi shutdown that happened in Sacramento last June, forwarding a 2,000-page report to the District Attorney’s Office. Law enforcement is urging the DA to charge 106 individuals with 514 misdemeanors and 68 felonies over the stoppage of the white nationalist rally that happened nearly a year ago at the State Capitol. While the intent here is no doubt to scare people, there is still a legitimate threat directed at our community. With this in mind, we would like to humbly offer these suggestions to prepare for the repression that the state has in store. This statement is intended for any anti-racist and anti-fascist protesters who attended the anti-Nazi demo on June 26, 2016, but it is also relevant to anyone in the same communities as those who attended. END_OF_DOCUMENT_TOKEN_TO_BE_REPLACED 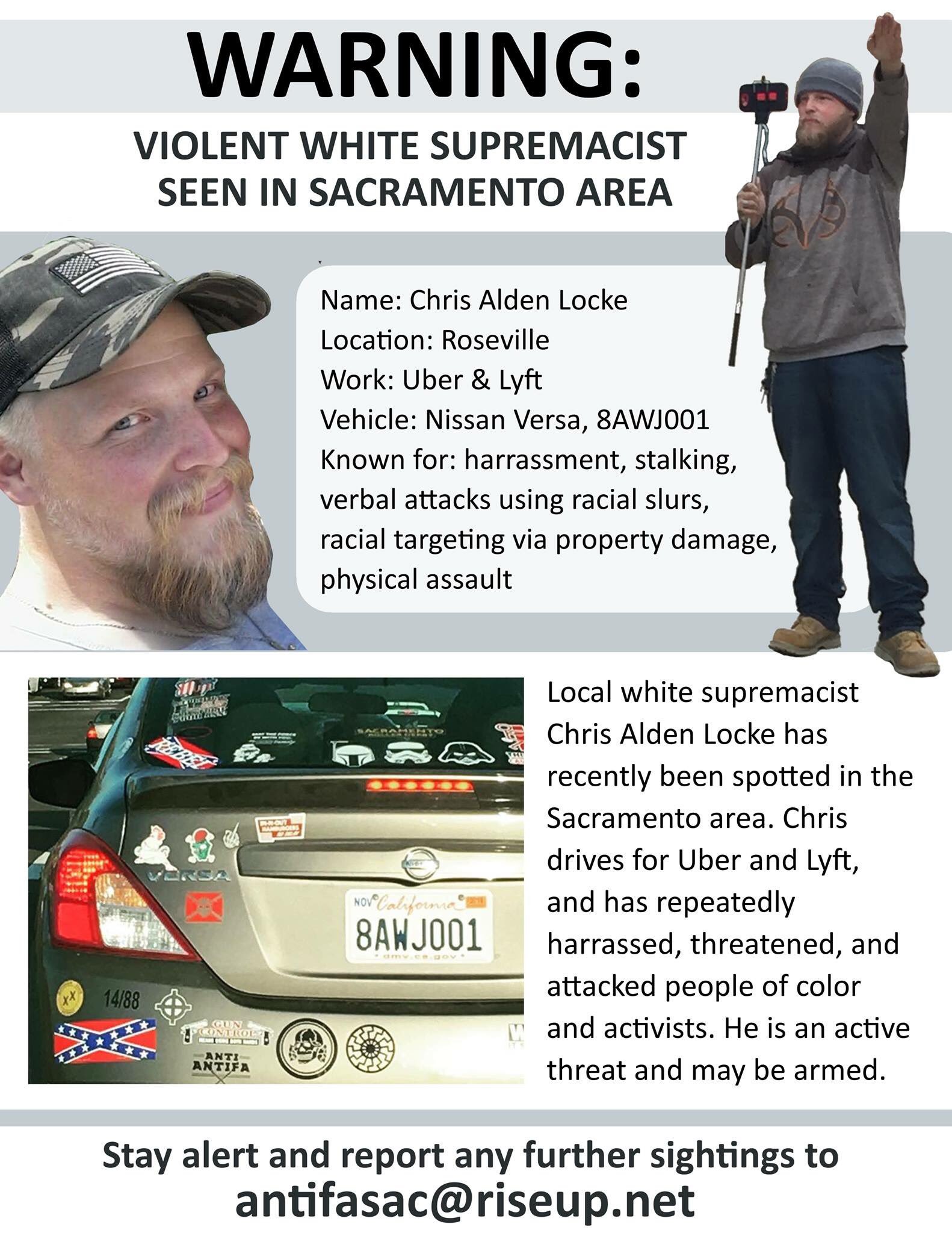 Many activists in the Sacramento area are already familiar with the exploits of Christopher Alden Locke, a local nationalist, christofascist, closet case, and compulsive liar extraordinaire who got his start as a gay rights activist and Anarchist. Chris has a history of lying and unpredictable behavior that dates back to long before he even came out as a nationalist and Neo-Nazi supporter. Now, Chris has taken up arms against a local reproductive health clinic in a string of disturbing events ranging from extreme stalking to a possible connection to a recent break in. The community must put an end to his reign of terror before it goes any further, and the first step is exposing him for what he truly is. END_OF_DOCUMENT_TOKEN_TO_BE_REPLACED