Joseph Ryan Simmons (AKA Josef Sigmundr) and his wife Anna Stasia Simmons (AKA Anna Sigmundr / Anna Lovesee) are two local white supremacists associated with the neo-Nazi gang the Golden State Skinheads (GSS). Joseph was one of twenty GSS members who participated in the infamous neo-Nazi rally at the State Capitol on June 26th, 2016. After the rally was canceled due to overwhelming opposition, GSS members brutally attacked anti-racist counter-protesters with knives and clubs , Joseph himself was carrying a knife on the Capitol grounds that day. 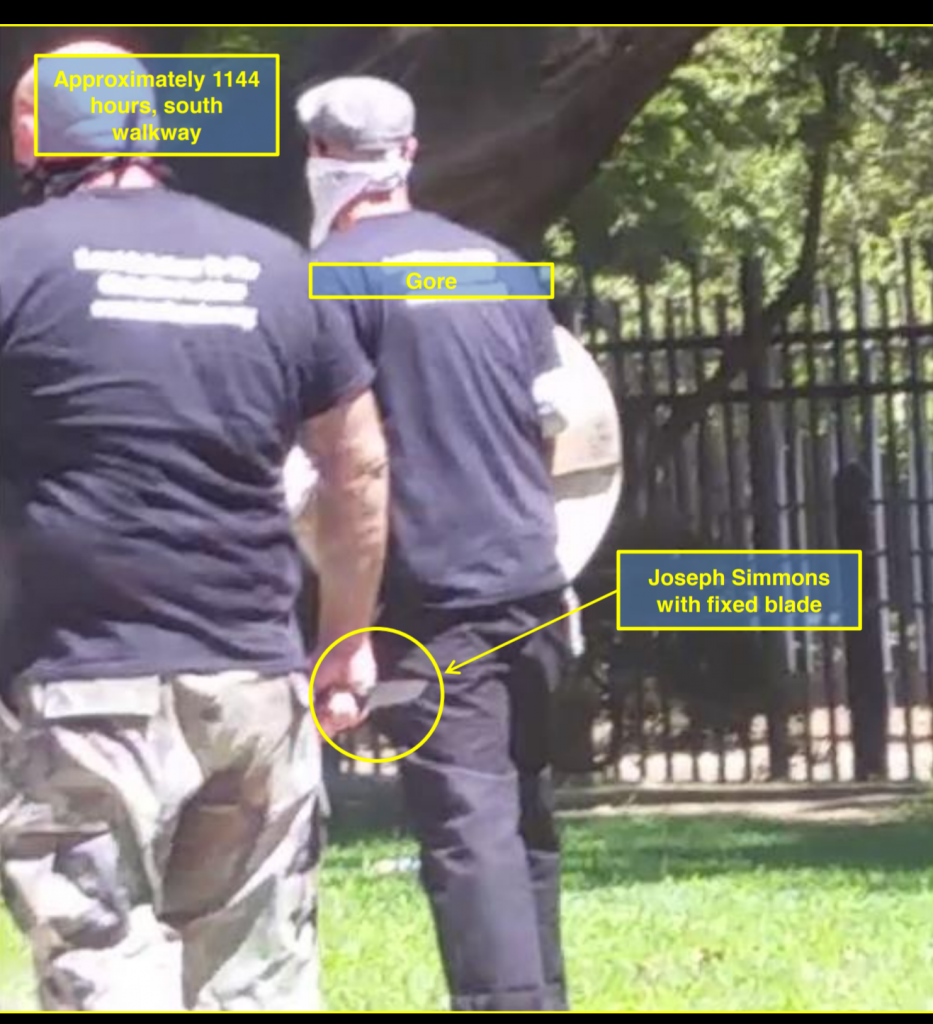 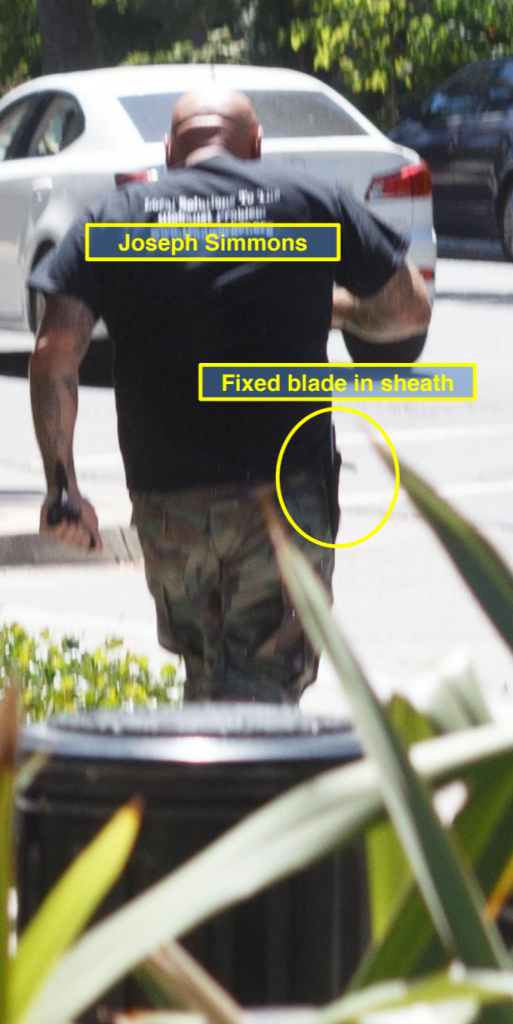 Since then, Joseph has been one of the GSS members supporting  William Planer the single Nazi facing  charges from the attacks carried out at the rally. He has been involved in fundraising for Planer’s legal defense and has attended a number of Planer’s court dates.

Joseph Simmons is well connected in the white supremacist movement, and has ties to numerous neo-Nazis in GSS and beyond. In fall of 2016, Joseph and fellow GSS member  Jason Judd  went on a trip with Matthew Branstetter and Skyler Segeberg, two Hammerskins who later joined the Rise Above Movement (RAM)  to  Stone Mountain, a landmark significant to white supremacists because it is where the second Ku Klux Klan was founded.

Joseph and Anna Simmons are also members of the Asatru Folk Assembly (AFA), a Pagan religious group with a well-documented history of white supremacist leanings. AFA was founded in 1994 by white nationalist Stephen McNallen, and excludes non-white and LGBTQ people from joining. The Asatru Folk Assembly is so infamous for it 100 other Pagan groups that follow the Asatru religion have formally denounced  them. It is classified as a neo-folk hate group by the Southern Poverty Law Center, and a “hate group on the extreme fringe of Heathenry” by religious scholar Dr. Karl EH Seigfried.

The Asatru Folk Assembly frequently shares subtle fascist content on their website and social media, including references to the 14 words (a popular Nazi slogan). Here is an Instagram post that features white supremacist rhetoric and the pagan rune that was adopted by the SS in Nazi Germany, 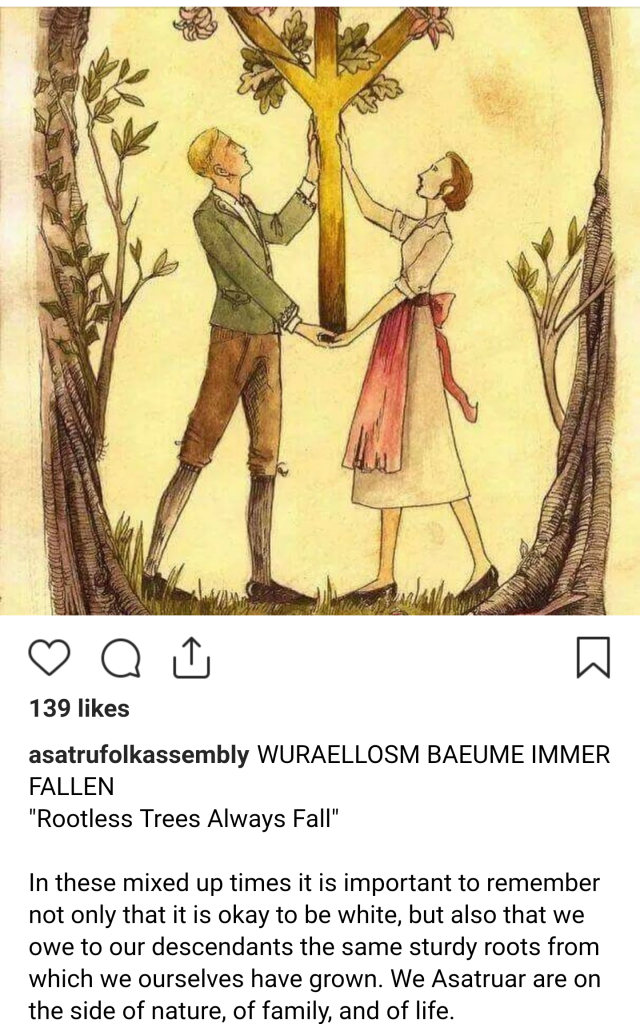 In June of 2017, Anna Simmons was seen wearing an Asatru Folk Assembly T-shirt while attending Islamophobic’s “Anti-Sharia Law” demonstration in Roseville, organized by ACT for America.

Joseph is also connected to Asatru Folk Assembly founder Stephen McNallen on social media. retweeting a tweet by the Wotan Network, another of Stephen McNallen’s white nationalist religious endeavors. The tweet celebrates the August of 2017 torch lit march in Charlottesville, Virginia where hundreds of white nationalists marching on the university campus chanting anti Semitic and white supremacist chants and attacking counter-protesters. The original tweet is no longer available as the Wotan Network’s account has been suspended by Twitter, but as usual we have the receipts. 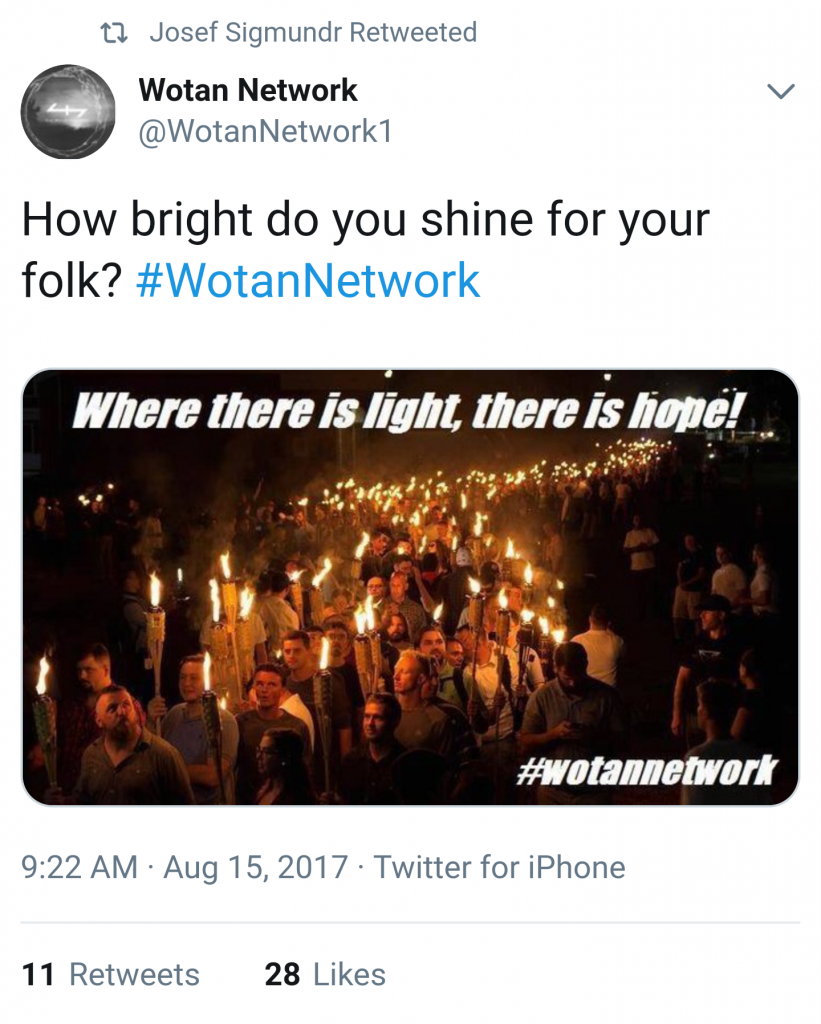 Have any additional information on Joseph and Anna Simmons or any of their affiliates? Email us at antifasac at riseup.net. Thank you.