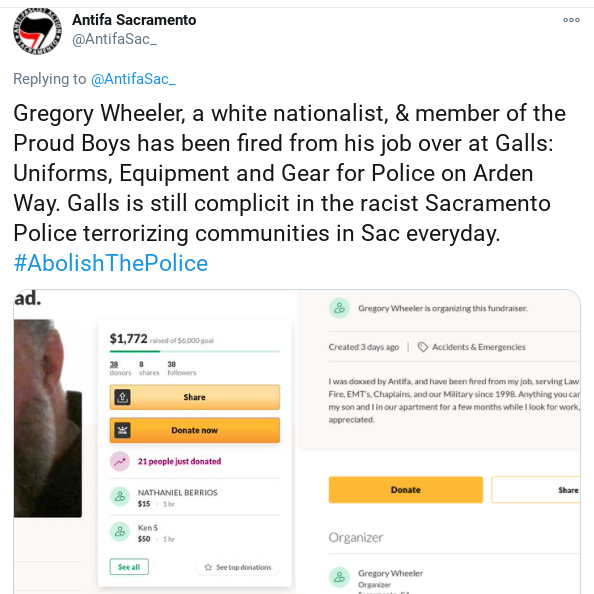 Meet Gregory Scott Wheeler. He is a white nationalist and a member of the Proud Boys living and working in the Arden area of Sacramento. Wheeler has a habit of posting racist, anti-LGBTQ, and misogynistic content on his social media, frequently featuring the confederate flag and the Proud Boys laurels. In the following post you’ll see where he works, lives, what his affiliations are and why this Proud Boy is particularly concerning. 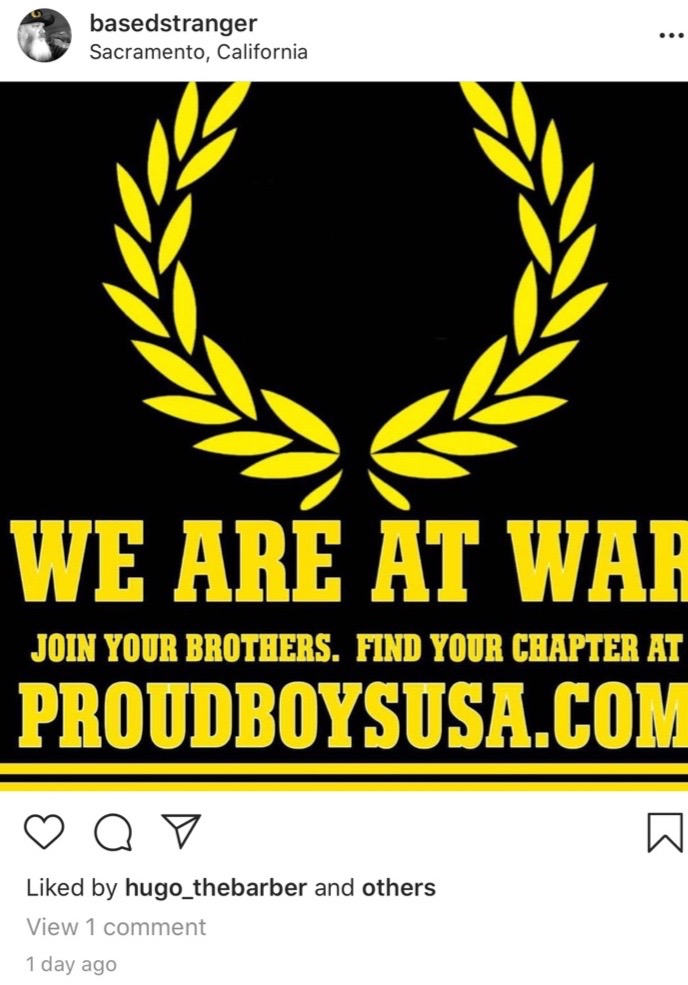 Greg Wheeler has been a member of the Sacramento Proud Boys for one year now. The chapter itself has existed for over three years, and the Proud Boys as a whole date back to the fall of 2016. We went into their origin, history, and ideology including the fact that they marched among the neo-Nazi groups at the deadly Unite The Right demonstration in Charlottesville in our article on Brandon Witte in August of 2019. The local chapter has traveled to demonstrations in Berkeley, San Francisco, and Portland in 2017 and 2018. More recently they have been seen at several “Reopen California” rallies that were happening at the capitol back in the spring. The rallies themselves were financially backed by large right leaning organizations, had little to do with the stated goal and were more opportunistic than anything. This was an opportunity for the far-right to mobilize and gain momentum and they were trying to capitalize on a pandemic to do so. Meanwhile, large numbers of right-wingers were heading to downtown Sacramento with no intention to take any precaution during a global pandemic and the Sacramento Proud Boys were right there with them. 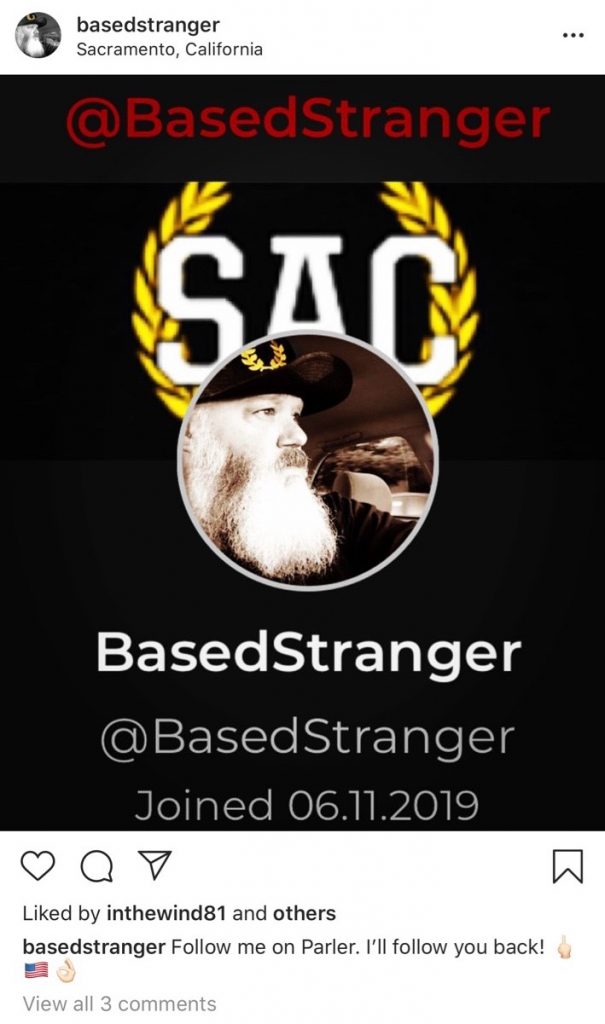 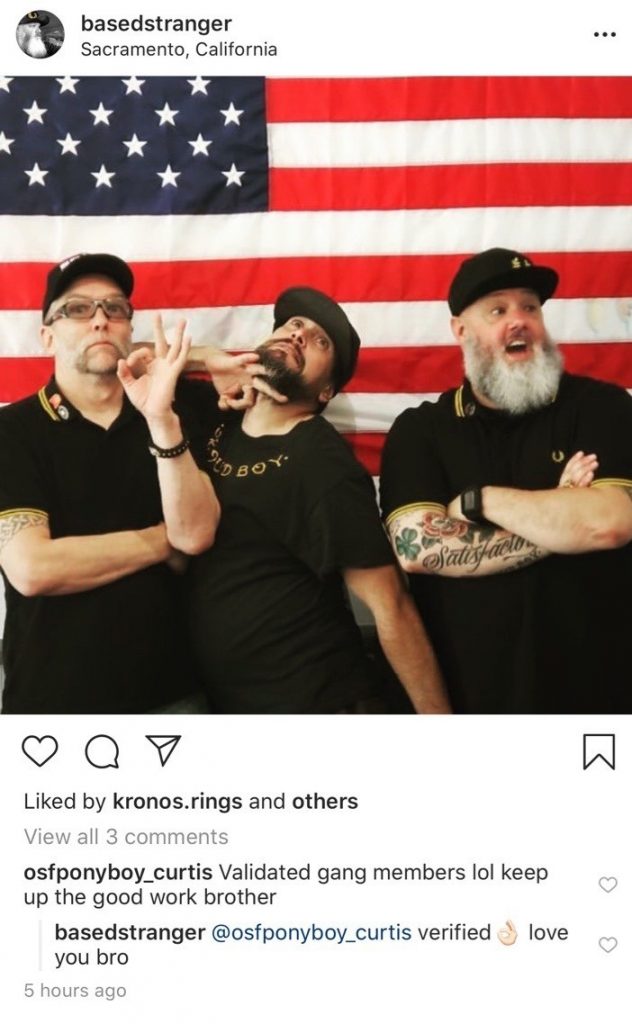 As with most Proud Boys, we see a lot of misogyny and Islamophobia as we monitor Wheeler’s online activity, but it doesn’t take long to see that its his Instagram where his white nationalism comes through. A month after Dylann Roof–a confederate flag-waving white supremacist–murders 9 black parishioners at the Emanuel African Methodist Episcopal Church, Wheeler posts pictures pledging allegiance to the confederate flag. In a February 2016 post, he shows his support for the Soldiers of Odin, a neo-Nazi group that was, at the time, engaging in racist, anti immigrant “patrols” in Finland and Norway. More recently, in 2017, he posts an image that includes the SS lightning bolts.This is a symbol that many white nationalists gravitate towards, because it references the SS in Nazi Germany. 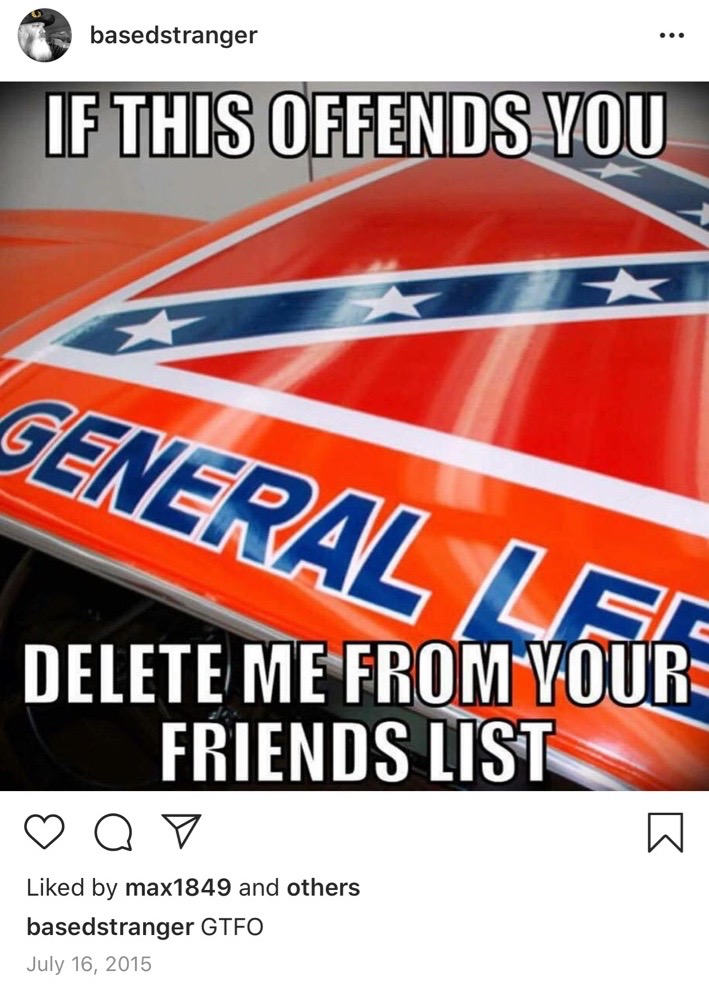 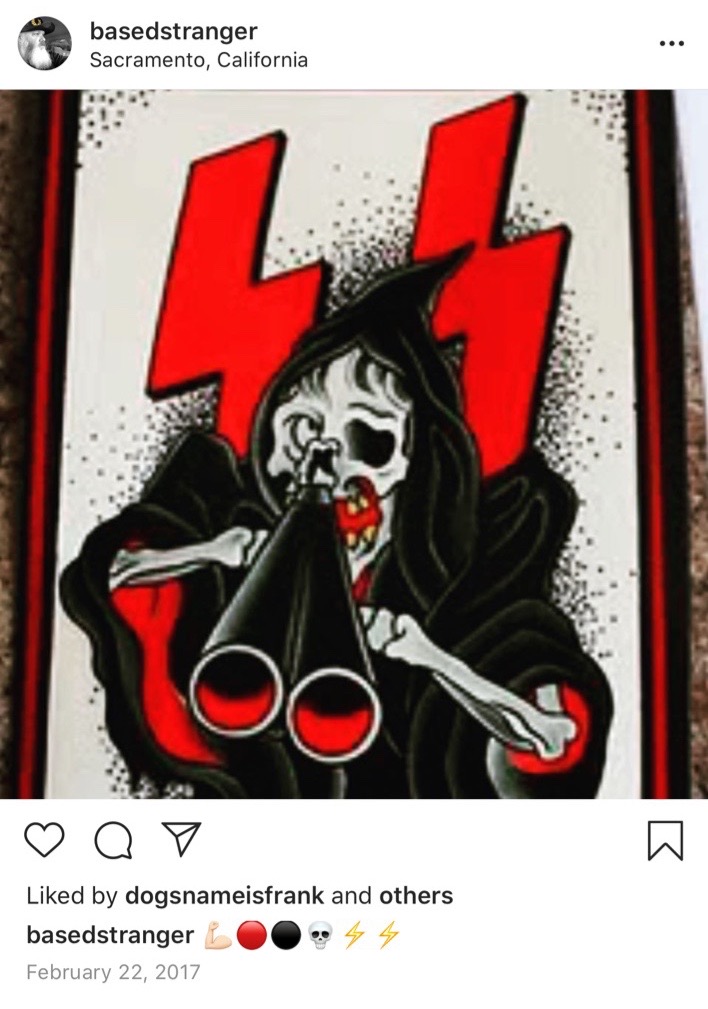 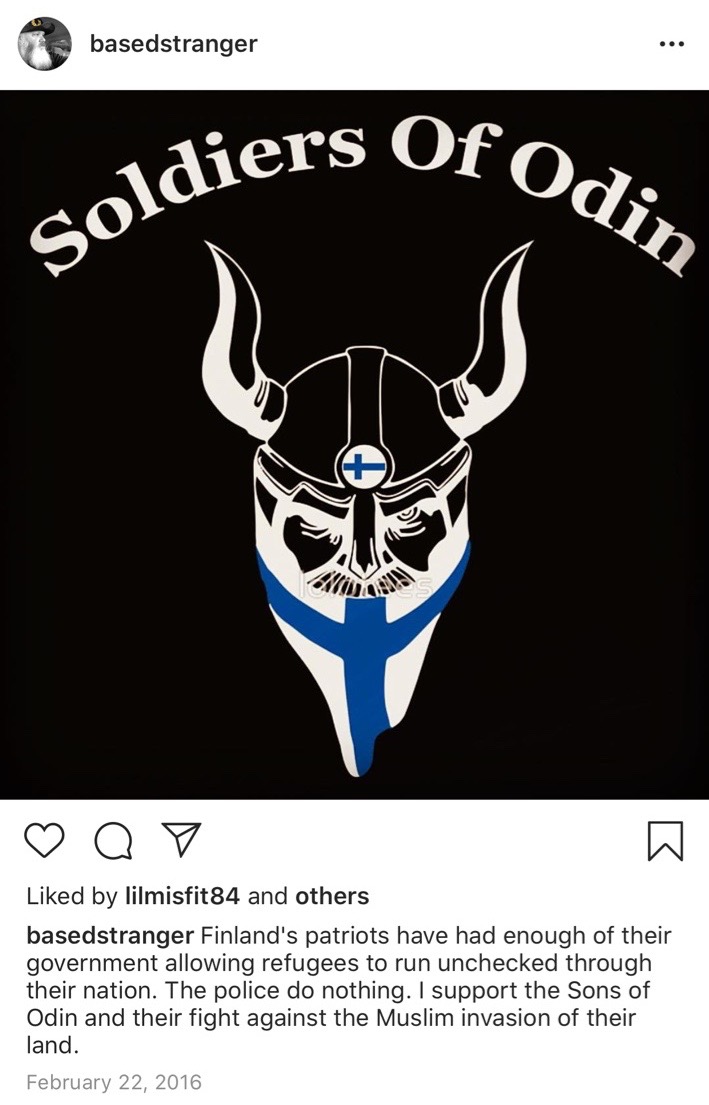 Wheeler spends a lot of time online, judging from the sheer volume of his posts on Instagram and Twitter. As in the case of his Instagram, his tweets are also very concerning. In one tweet dated June 10th, 2020, he calls for mass murder of protesters who were a part of the Capitol Hill Autonomous Zone ( CHAZ ). The CHAZ was a protest encampment in the capitol hill neighborhood of Seattle that lasted from June 8th to July 1st, and was established in the wake of the George Floyd uprisings that swept the nation. More recently in a tweet reply, Greg Wheeler suggests that cops should start shooting protesters in Portland with “real bullets “. 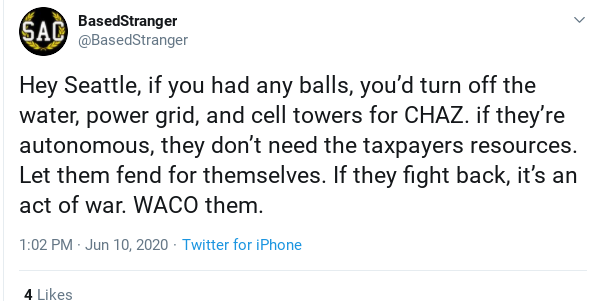 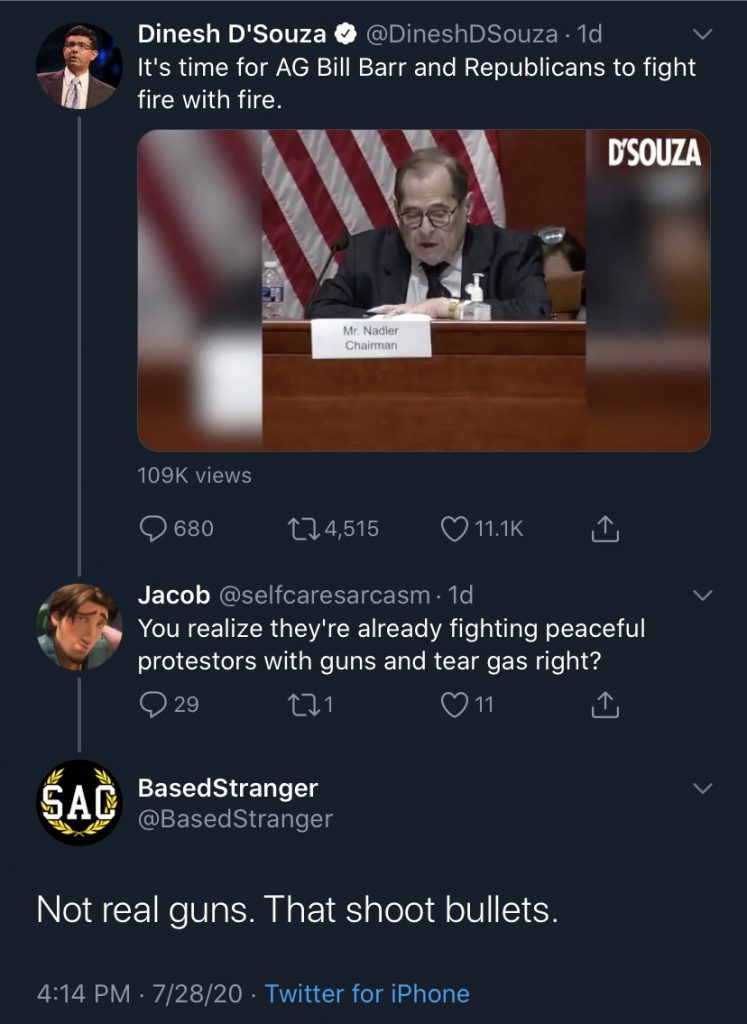 His Twitter profile is also interesting: this is the online persona he has crafted for himself. In it, he describes himself as a third-degree Proud Boy, which is a designation given to a Proud Boy who gets “Proud Boy” tattooed on himself. He also references the #fandommenace. Fandom Menace is a serious YouTube community rallying against inclusion in the Star Wars universe, particularly the newest trilogy of movies and spin-offs. They despise Kathleen Kennedy (the president of Lucasfilm ) and claim Star Wars has “folded to the SJWs”  because of its inclusion of women and people of color in the cast. One of the clips in a video criticizing Fandom Menace was a vlogger from the Fandom Menace community saying they’re after ” men, white men at that”. Promoting such an indefensible online community falls in line with Gregory Wheeler’s white nationalism and misogyny that he displays in his online activity. Between his white nationalist Instagram posts and his Twitter activity makes it apparent that he needs to be monitored, and the community be warned of the danger he poses. 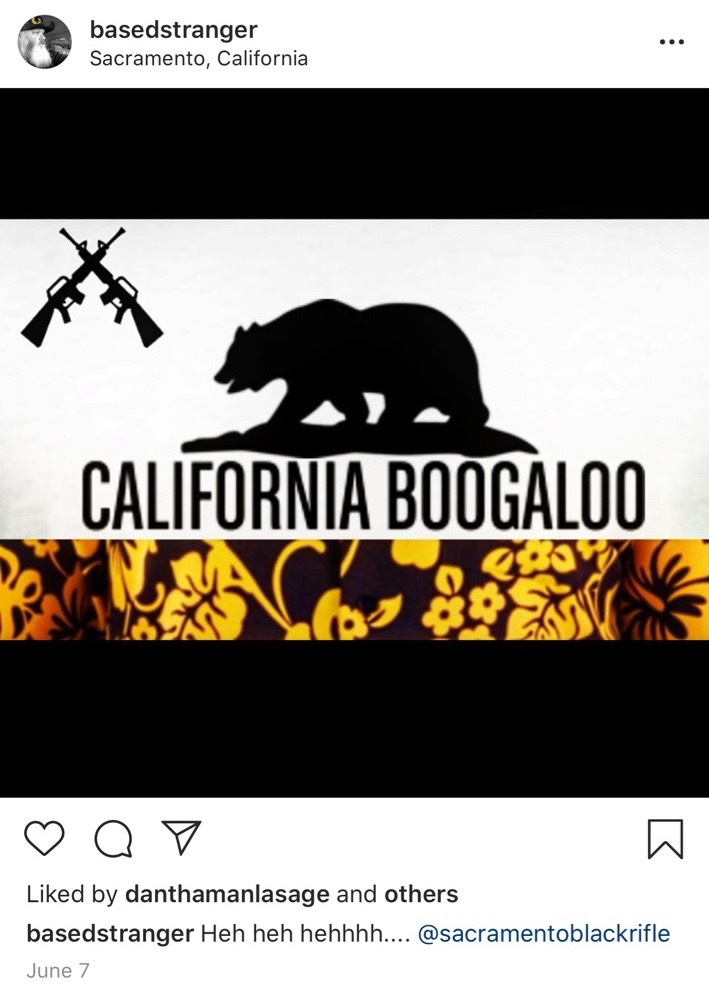 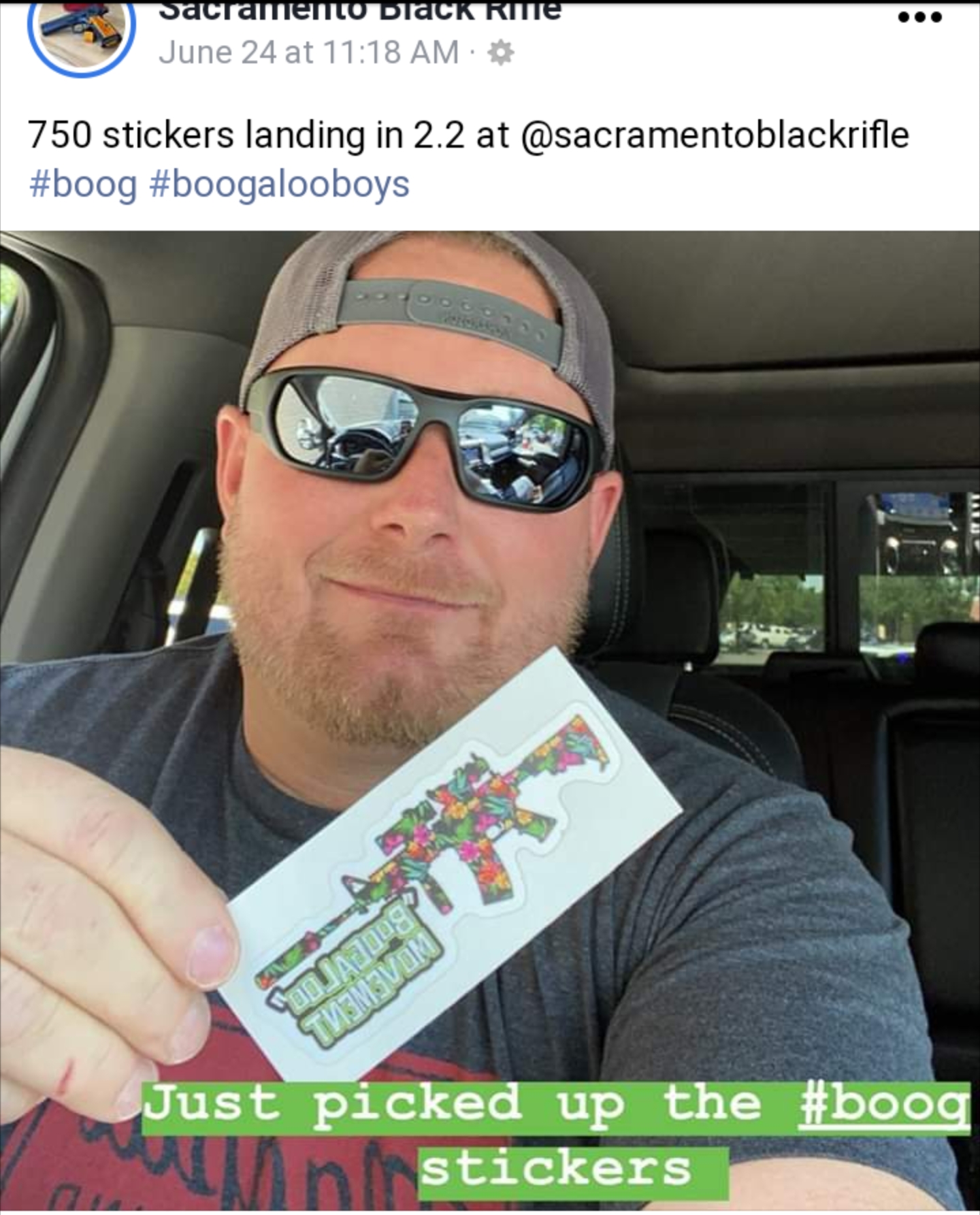 Wheeler is a member of the E Clampus Vitus, an ironic fraternal order that dedicates itself to the perpetuation of the myth of the Western frontier. Given his penchant for white supremacist imagery, it is unsurprising that he is also invested in an inherently white supremacist myth that has been used to justify settler colonialism and the genocide of indigenous peoples. Below is a picture of his vest that he brought to a ECV gathering in Camp Far west, CA in April, 2019. Particularly notable is the ECV imagery set alongside white supremacist imagery: for example, the skull and crossbones in the confederate flag hat, and the two instances of the “OK” hand sign, which is a covert White Power hand sign. 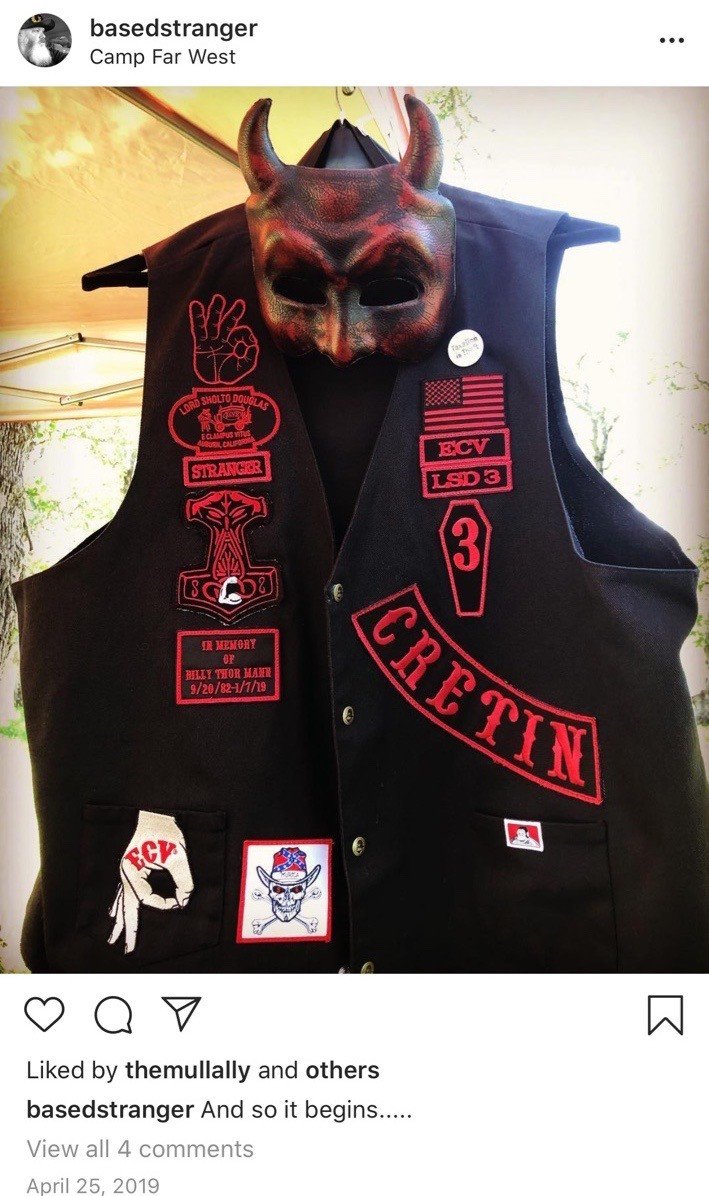 Interestingly enough Greg Wheeler works at Galls: Uniforms, Equipment and Gear for Police managed by Theresa Leininger. Galls is the local outfitter for the Sacramento Police Department. So, Greg and Theresa make sure the SPD that terrorize neighborhoods all throughout Sacramento have the gear and uniform they need to brutalize, harass, and even kill the residents of Sacramento. Galls is located at 2333 Arden way in Sacramento. 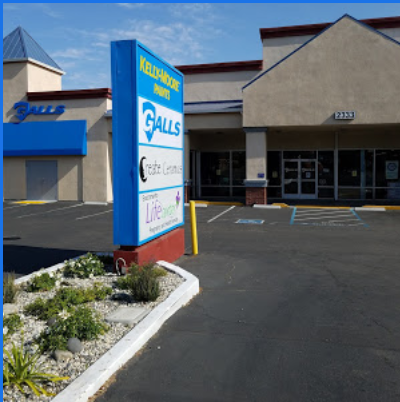 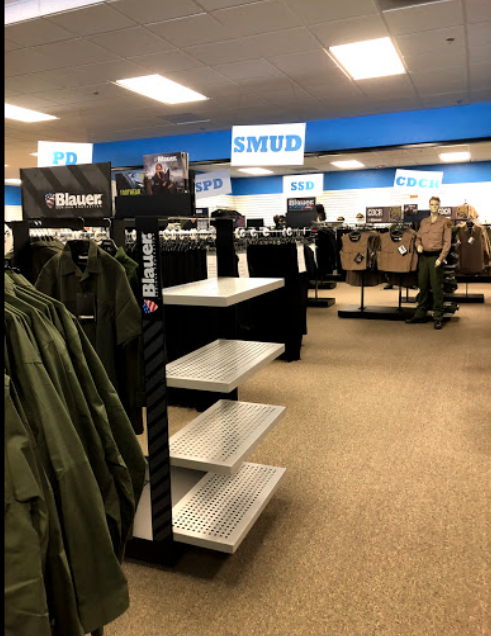 The Sacramento Proud Boys are not as cohesive as they once were and aren’t very active these days, politically speaking. However, as individuals, or in a group, they pose a threat not just at demonstrations but to others they may encounter in their day-to-day lives. With someone like Gregory Wheeler who is both a Proud Boy and a white nationalist, finding out where he carries out his daily activities is beneficial so we can all be better prepared. Putting out alerts near his workplace, his apartment, and the grocery stores he frequents is an important part in alerting the community to a racist who is part of a network of neo-fascists. Please e-mail us with any additional information you may have on Greg Wheeler. 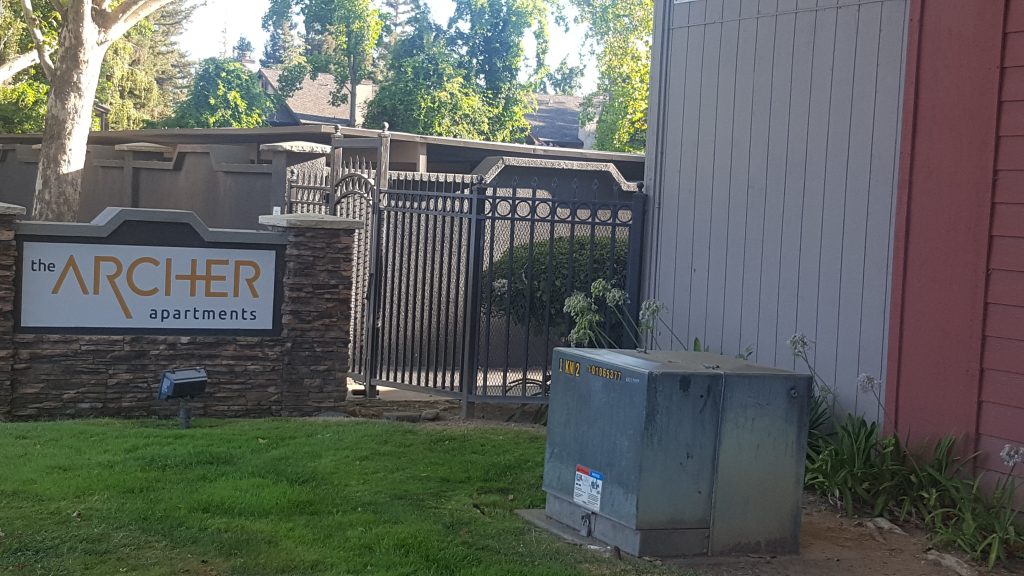 If you have any additional information about Gregory Wheeler please e-mail us at antifasac (at) riseup.net