Pride Month is in full swing and far-Right groups, including the proud boys, are on a homophobic rampage. One such Proud Boy, Brandon Revering, is also likely using his standing as a registered arms dealer to supply other fascists with the materials needed to assemble illegal firearms.

Brandon Revering is a Sacramento local and US Army Infantry veteran who first appeared publicly with the Proud Boys in late 2020 – right around Biden’s inauguration and the far-Right push to stop the election. Around that same time, Revering transformed his existing online business, a failed marketplace for disc golf supplies, into an online gun store. The products offered included blanks that, when completed, are commonly used to make unregulated “ghost guns.” In fact, the specific blanks sold by Revering appear impossible to legally register in the state of California, strongly pointing to an unregulated, untraceable firearm as the intended result. But, more on that later- let’s take a look at what Revering has been up to since his debut in 2020.

In mid-2021, Revering participated in a far-Right memorial event for Ashli Babbitt, a Trump supporter who was killed by police during the pre-Inauguration Day takeover of the US Capitol. When a handful of counter-protesters appeared, Proud Boys and other far-Right individuals surrounded them and attacked. In a video of the scuffle, Revering can be seen hurling a water bottle at the counter-protesters. Later in the day, Revering and other Proud Boys destroyed a nearby BLM memorial honoring Breonna Taylor.

A few months later, Revering appeared alongside other Proud Boys at a now notorious “Straight Pride” rally in Modesto. The rally, which was held outside of a Planned Parenthood clinic, was unapologetically anti-LGBTQ and white supremacist. Event organizers billed it as an opportunity to celebrate the “inherent superiority” of “heterosexuality, traditional gender roles, and whiteness.” Proud Boys and other far-Right extremists flocked to the event, and took pleasure in harassing and assaulting the handful of LGBTQ youth who showed up in opposition. A few months after that, Revering and other Proud Boys descended on San Pedro, CA for a so-called “Patriot Love Fest,” which culminated in heartwarming moments such as a group of Proud Boys harassing local youth in front of a taco truck.

Brandon Revering continued to be an active member of the Proud Boys in 2022. In February, he participated in one of the group’s freeway banner drop events in Rancho Cordova. During the banner drop, two approaching street journalists were attacked unprovoked by a Proud Boy and beaten with a pole until they fled.  Throughout March and April, Revering attended a string of Davis Unified School Board meetings as part of a national push by the Proud Boys against mask mandates in public schools. During one of these meetings, Revering made several pro-Nazi and anti-Semitic comments, including praising national socialism (i.e. Nazism). Most recently, Revering showed up to harass attendees of a local Planned Parenthood march following the leaked Roe v. Wade decision.

Revering’s online activity also reflects his fascist views- below are some of his Reddit posts: 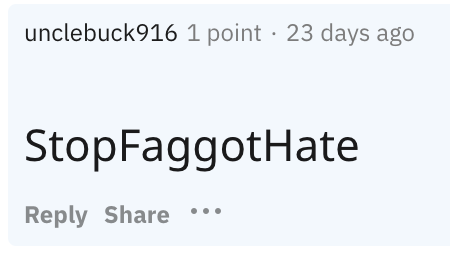 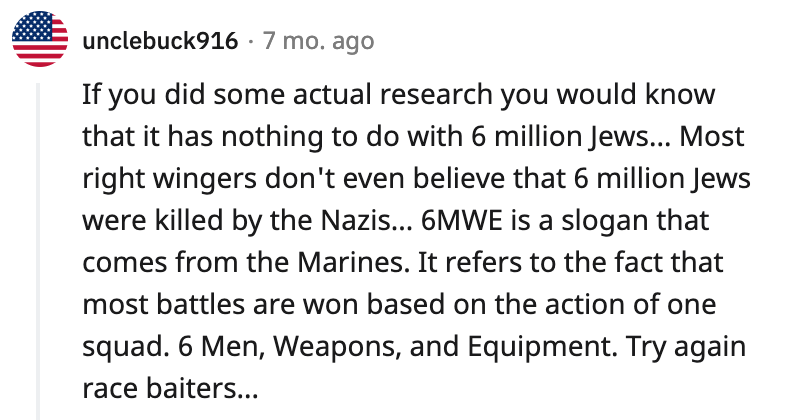 In the above Reddit comment, Revering defends the phrase “6MWE” (which stands for 6 million wasn’t enough, referencing the number of Jewish people killed in the holocaust) with a lie that the phrase means “6 men, weapons, equipment.” This claim is false– Google search data at the time showed zero results for any variation of that phrase prior to 6MWE shirt pic going viral. Like a true closeted Nazi, Revering relies on plausible deniability to get away with his genocidal dogwhistles.

Alongside his street activity, Revering was also working to aid the Proud Boys in more profitable ways. He adapted the concept behind his previous business, an online marketplace where vendors pay commission to sell custom disc golf equipment- and geared it towards Proud Boys hoping to sell overpriced merch instead. Thus, POYApparel was created. POYApparel features Proud Boy themed goods sold by various far-Right vendors, including the Sacramento “Cap City” Proud Boys chapter and Revering’s own brand, Privileged USA. Terms of Service make clear that while some general “patriotic” merch is acceptable, the main purpose of the site is to create a marketplace for Proud Boy merch. Items include several shirts featuring racist and homophobic slurs.

Revering also uses POYApparel to market a web design service specifically for Proud Boy chapters, offering to create and host chapter websites for a fee. According to the samples he provides, Revering has already created websites for the Sacramento, Hell Valley, Northern Reservoir, and Central Valley chapters. Although the simple design of these sites is unimpressive, they are an integral recruitment tool- enabling Proud Boys to more effectively grow their member base and spread their hateful ideology. Proud Boys use these websites to recruit online, and include links to them on their posters, stickers, and banners during “flag wave” events and other outreach.

As previously mentioned, Revering renamed his disc golf LLC and turned it into an online gun dealership around the same time that he got involved with the Proud Boys. His firearms business, now Privileged USA, was originally named Lone Wolf Weaponry. This is an allusion to the so-called “Lone Wolf Attack” in which a lone actor carries out mass violence- usually with white supremacist/anti-Semitic motives. Lone wolf attacks have been glorified among the far-Right, and have origins in the concept of “Leaderless Resistance,” which was advocated by Klan leader Louis Beam in the 1990s leading up to the 1995 Oklahoma City bombing. Though Revering has changed the address of his arms sales page to match his LLC, the “Lone Wolf Weaponry” name still shows up on his Federal Firearms License, his facebook and instagram pages, and on internal links throughout the page, where he seems to have been sloppy in changing it. Brandon also has an extensive post history on calguns.net that gives a glimpse into his private gun collection. In one sale post in which he lists a lot of five shotguns, he says “I have far too many shotguns in my personal collection and am just looking to get rid of some of the ones I never shoot anymore or never shot really at all”. Other posts show him selling Glock components and a complete AR-15 rifle.

PrivilegedUSA sells a variety of guns, gun parts, and build kits, all shipped from Sacramento, CA. Most concerning, though, are his listings for Polymer-80 (P80) 80% frame blanks, or so-called “ghost-guns”. In the US, the regulated component of the firearm is the lower receiver (for pistols, the frame). 80% frames/receivers are sold uncompleted so that they are not legally regulated as gun parts- there is no background check required to purchase one, and they are unserialized and untraceable. Once purchased, the buyer can easily complete the manufacturing process, generally with a jig that is sold alongside the uncompleted frame, and using relatively common shop tools. When the blank is completed into a working gun, it must be serialized within the state of CA. However, it doesn’t appear possible to legally complete an 80% glock frame (the kind Revering was selling) in the state, for a few reasons:

– CA regulates handguns by keeping an approved roster of handguns that can be owned in the state. There are no P80 frames listed.

Prior to 4/21/2022, PrivilegedUSA had more P80 frame blanks and parts kits for sale than complete, regulated guns. At some point between late April and early May, Revering removed all of the P80 listings. Despite this, the website still retains a (now empty) category for “80 Percent” and an (also empty) manufacturer category for Polymer80, as well as the parts kits. Archived proof of the now-deleted P80 listings are available here, here, and here. It’s also worth noting that Revering began posting as a Proud Boy from his personal Reddit account shortly before the P80 frames disappeared from his site. When he realized that his identity could be exposed, he deleted his Reddit account post history and removed the P80 listings. Clearly, Revering didn’t want his Proud Boy activities connected to his sale of ghost guns.

Not only that, but there’s also strong evidence that Revering has assembled these ghost guns himself. On some of his listings for P80 parts kits, the description states that all parts are dry tested on a PF45 frame. Given that assembly would be necessary to perform such a test, and given that Revering’s website shows no evidence of out-of-state operations, we can only conclude that he is in possession of a completed P80 gun.

All of these data points paint an extremely concerning picture. Revering is a gun-obsessed fascist who glorifies “lone wolf” mass shootings and has access to a huge stockpile of firearms, including untraceable ghost guns. At the very least we can assume that other Proud Boys have access to the P80 kits Revering is selling- especially considering his demonstrated interest in making money off his fascist buddies. But one has to wonder- what is the point in owning such a gun kit if it can’t be legally completed? It doesn’t take much to connect the dots. The bottom line is this: Brandon Revering has been distributing all the materials needed to produce unregulated, untraceable firearms, and by proxy, the Proud Boys he associates with have easy access to them.

During his time as a member of the Proud Boys, Brandon Revering has participated in numerous far-Right street actions, including attacks and harassment. He has created a platform for himself and other Proud Boys to profit off of hateful merchandise, and has enabled further fascist activity and recruitment through the Proud Boy chapter websites he creates and maintains. He valorizes the violence of mass shooters. Most concerning, he has access to unregistered, untraceable guns and is likely arming other Proud Boys with them. Revering is a serious threat to our community and his organizing efforts must be disrupted by any means possible. 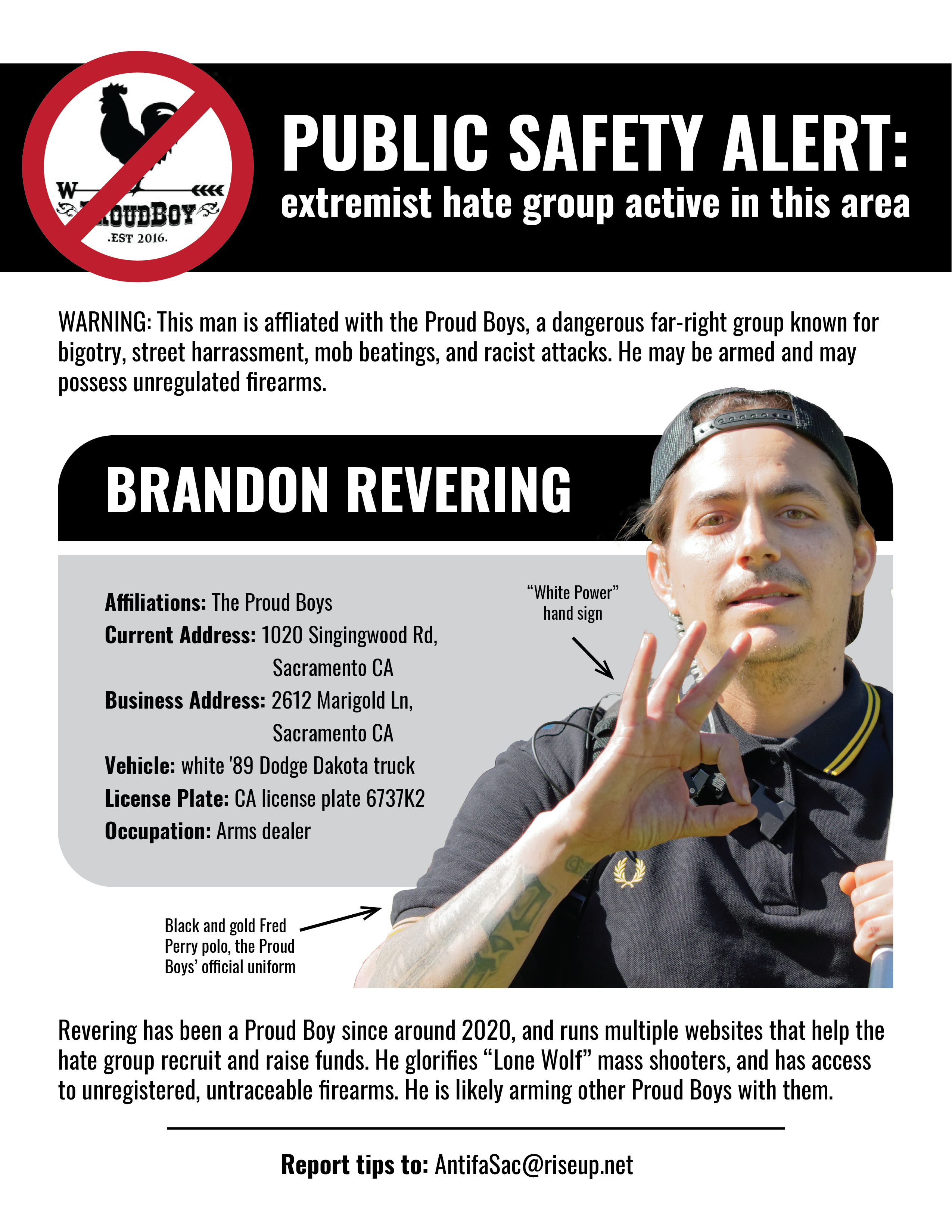 Have additional info for us? You can reach us at antifasac(at)riseup(dot)net