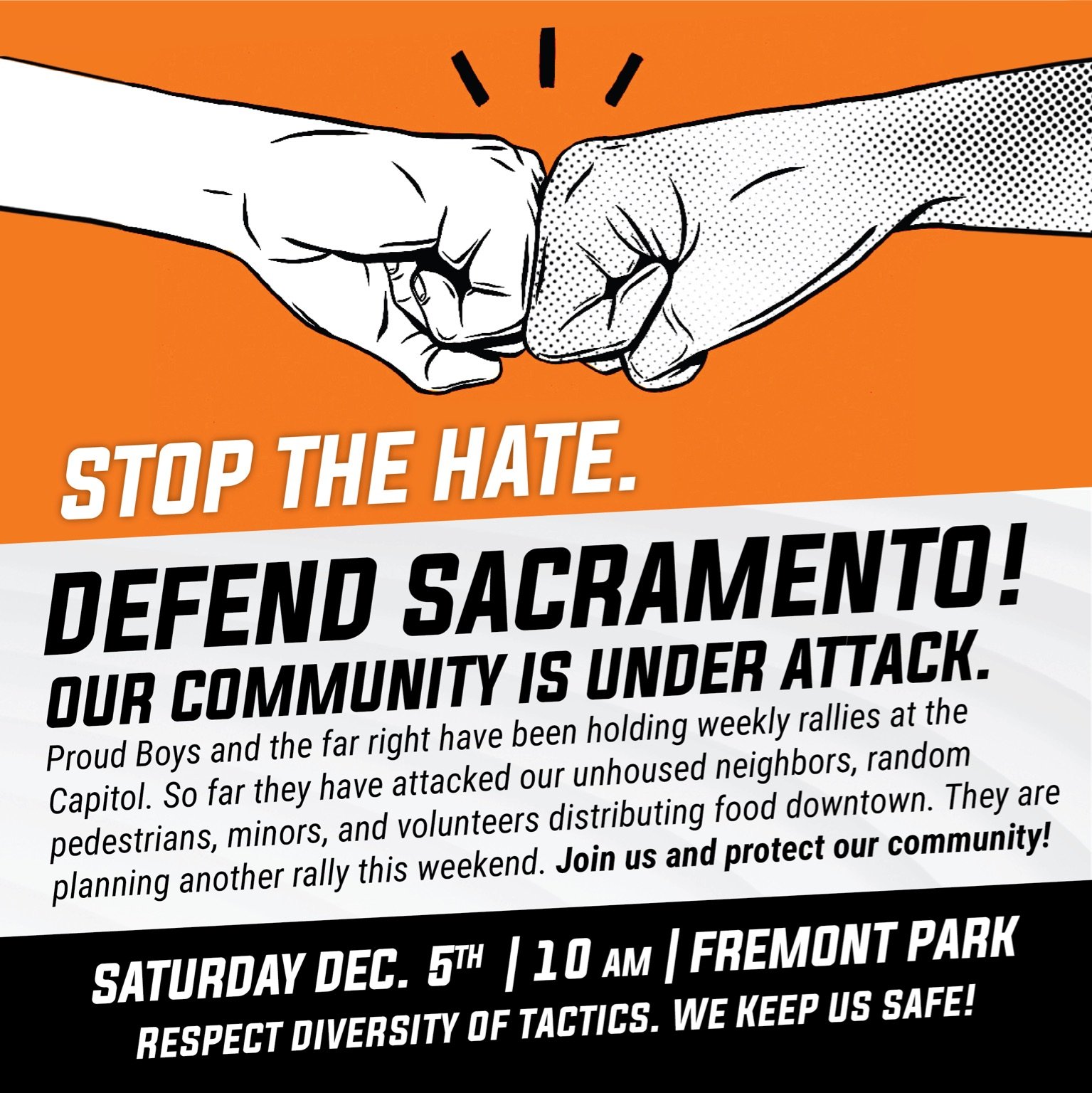 Not In Our Streets: A Statement Against Far-Right Terror

For four consecutive Saturdays, Proud Boys, Trump supporters, and the far-right have rallied at the State Capitol in Sacramento. These demonstrations are not simply about Trump vs. Biden or Republican vs. Democrat. The far-right is using electoral politics as a platform to incite violence, terror and harrassment.

As we have seen, anyone on the street is a target. The far-right have harrassed, threatened, pepper sprayed, chased, and beaten our unhoused neighbors, volunteers distributing food, restaurant workers, minors, random pedestrians, activists, media, legal observers, and volunteer medics. They have specifically targeted black and brown folks in the downtown/midtown area.

The far-right have marched through our city and declared it theirs, and they are planning to continue this behaviour indefinitely despite the recent COVID-19 restrictions.

The Sacramento Police Department (SPD) has openly encouraged this violence against our community. During these rallies, multiple pieces of video footage have shown law enforcement looking the other way while far-right attackers carried illegal weapons and committed mob assaults. SPD has declined to detain a single far right agitator, choosing instead to stand down and then subsequently arrested the victims of their attacks. Counter-protesters and victims of far-right violence have also been held at unreasonably high bail.

Each week, the far-right has escalated their violence against our city. Ignoring them will not make them go away, and we refuse to let them continue. Instead, we must come together and defend our community.

We are calling on all individuals and organizations to join us in taking a united stand against far-right extremism and organized terror.

1. Stand against white supremacy: Hatred, bigotry, and police terror in all forms are unacceptable. We condemn these far-right rallies, law enforcement’s collusion, our elected officials’ complicit silence, and the violence and hate it has brought to our city.

2. Reject far-right terror: Sacramento residents should be able to go about their daily lives without harrassment. Our unhoused neighbors should feel safe obtaining food in public spaces. Our youth should not be indiscriminately assaulted by fanatics and then arrested by law enforcement.

3. Community defense: The state won’t save us. We must rely on each other when our community is under attack. We are committed to working together toward racial justice, equity, intersectionality, and empowerment against all forms of oppression.

4. Strength in unity: Together, we can stand up to this threat through solidarity, mass action, and a diversity of tactics.

5. The time is now: History has shown us that standing idle in the face of far-right extremists only makes them stronger. We must act decisively today, so that far-right violence and terror does not grow tomorrow.

We, the undersigned organizations of Sacramento and the Northern California area, condemn these rallies and call upon our members and our greater community to stand up against far-right violence and bigotry on Saturday, December 5th, 10 am, at Fremont Park.