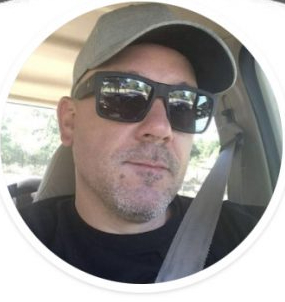 Michael Lawrence Staley is a 42-year-old Proud Boy living in Galt, California. He was also part of the neo-fascist group’s presence at recent “Stop the Steal” rallies  in Sacramento. While public focus has been on the Jan. 6, 2021 attack on DC, right-wing violence from groups like the Proud Boys has also escalated locally, as seen in the weekly far-right rallies that occurred here in Sacramento leading up to Inauguration Day. This behavior is, by no means, an aberration. Michael Staley and other Proud Boys are part of a violent, bigoted movement, and are a credible threat wherever they entrench themselves.

On November 7th, 2020, the MAGA movement launched their “Stop the Steal” campaign, an absolute expression of frustration and rage in response to Trumps loss on November 3rd. Demonstrations were held nationwide, including at the State Capitol building here in Sacramento. The local rally drew a sea of Trump flags and MAGA hats to the downtown area; a crowd that was happy to host neo-fascist factions like the Proud Boys. The Proud Boys were welcomed as event security, and from that position, took it upon themselves to confront anybody they deemed opposition to the event. There were some very tense moments during the rally between anti-racist counter protesters and “Stop the Steal” rally-goers.

When the event was over, the Proud Boys piled into multiple pickup trucks, with 3 to 4 Proud Boys riding in the bed of each truck, ready to jump out. They drove around following anti-racist protesters and searching for others to intimidate and attack. One medic was ambushed by Proud Boys several hours after the event, and was nearly pushed off a bridge. One of the trucks that was used to stalk anti-racist protesters was a silver Dodge Ram belonging to Michael Staley.

Staley’s truck was seen multiple times after the rally was over, patrolling midtown with Proud Boys positioned in the bed. It was also spotted at other “Stop the Steal” rallies in the following weeks.

The Proud Boys escalated their pattern of violence and terror at subsequent “Stop the Steal” events. During two of these demonstrations, Proud Boys and other rally-goers marched from the Capitol to Cesar Chavez park, a location known as the nexus of numerous Black Lives Matter protests over the summer. The far-right had become fixated on the park because of it’s connection to George Floyd demonstrations during the summer of 2020. The George Floyd uprising was a source of frustration and rage for the far-right both all over the country, and in Sacramento. By the time November arrived, members of the far-right felt like they needed to claim Cesar Chavez Park in opposition to the memory of the George Floyd uprisings. Some were overheard saying that they needed to march to Cesar Chavez Park to plant an American flag.
Cesar Chavez Park has also become a safe place for our unhoused neighbors to gather, and community groups often distribute food and supplies at the park on weekends. All of these factors led to numerous instances of Proud Boys and other members of the far-right terrorizing and attacking unhoused people, community volunteers, and the small group of anti-racist protesters who scrambled to defend others at the park.

On November 28th, “Stop the Steal” rally-goers marched to Cesar Chavez park yet again. While their numbers were smaller than the previous week, many of them downed hard alcohol prior to marching. Intoxicated, determined, and full of rage, the rally-goers pushed past cops who tried to impede their progress to the park. However, the cops quickly cleared out soon after the rally-goers reached the park. Proud Boys could also be heard on livestreams that day talking openly about their desire to attack people. At one point, a livestreamer was heard saying, “We just want a civil discourse. We don’t want to hurt anyone.” A Proud Boy interjected, “I do!” Proud Boys were also heard talking about wanting to get their “4th degree,” which is earned by engaging in physical combat with or otherwise harming their opposition.

Each Saturday in the month of November was filled with Proud Boys and other MAGA supporters terrorizing our city. Michael Staley himself was a serious part of this wave of violence, especially considering his role in transporting groups of other Proud Boys set on hunting and attacking anyone they deemed a target.

The terror we saw in November at the hands of this movement is linked to the violence seen in a DC rally on December 12th. Many local Proud Boys traveled to DC to attend, and those who stayed home cheered it on from the sidelines. December 12th saw smaller numbers than the November 14th DC rally, but those that did attend were set on spreading violence and terror. That night, Proud Boys vandalized several historically black churches in DC by ripping down Black Lives Matter banners from the buildings and burning them in the street. This activity took place while hundreds of far-right protesters were taking to the streets each night throughout the weekend. Local Proud Boy, Jeffrey Perrine, was in DC for the events that weekend and defended the banner burnings publicly on social media.

Reverend Doctor Ianther M. Mills of the Asbury United Methodist church in DC highlights the inherently racist character of the banner burnings. “For me, it was reminiscent of cross burnings. Seeing this act on video made me both indignant and determined to fight the evil that has reared its ugly head. We had been so confident that no one would ever vandalize the church, but it has happened.”

In addition to the racist instances of property damage, Proud Boys also engaged in physical violence with those living in and around the area. There were numerous instances where individuals were chased and surrounded by large groups of Proud Boys who had come from all over the country (including Northern California) to swarm DC. The events of the weekend of December 12th also directly built towards what occurred in DC on January 6th.

The overwhelming intensity of the far-right demonstration and the taking of the US Capitol in DC on Wednesday, January 6th was nothing short of surreal. It was a demonstration of how far the far-right were willing to take the news of Trump’s exit. January 6 was an undeniable wake-up call to just what this movement is capable of. We’ve seen the danger in underestimating them in the past and that danger couldn’t be more clear now. The Capitol takeover and attempted coup on Jan. 6 was built directly from the far-right’s growing nationwide momentum and capacity to create absolute terror in previous weeks. Many violent far-right factions and other assorted neo-fascist groups were involved in the takeover, including the Three Percenters, the Oath Keepers, and the Proud Boys. It is unclear what far-right organizing will look like under the new administration, but the far-right movement has grown and adapted over the past four years. Its not simply going to go away. It is integral that anti-fascists, anti-racists, and concerned community members continue to expose, confront, and disrupt the lives of far-right organizers in order to weaken their movement and the threat it poses.

Below is a visual guide to common symbols, clothing, and dog whistles used by Proud Boys. Use it as a reference in helping to identify them, and share it around so everyone knows exactly what to look out for. 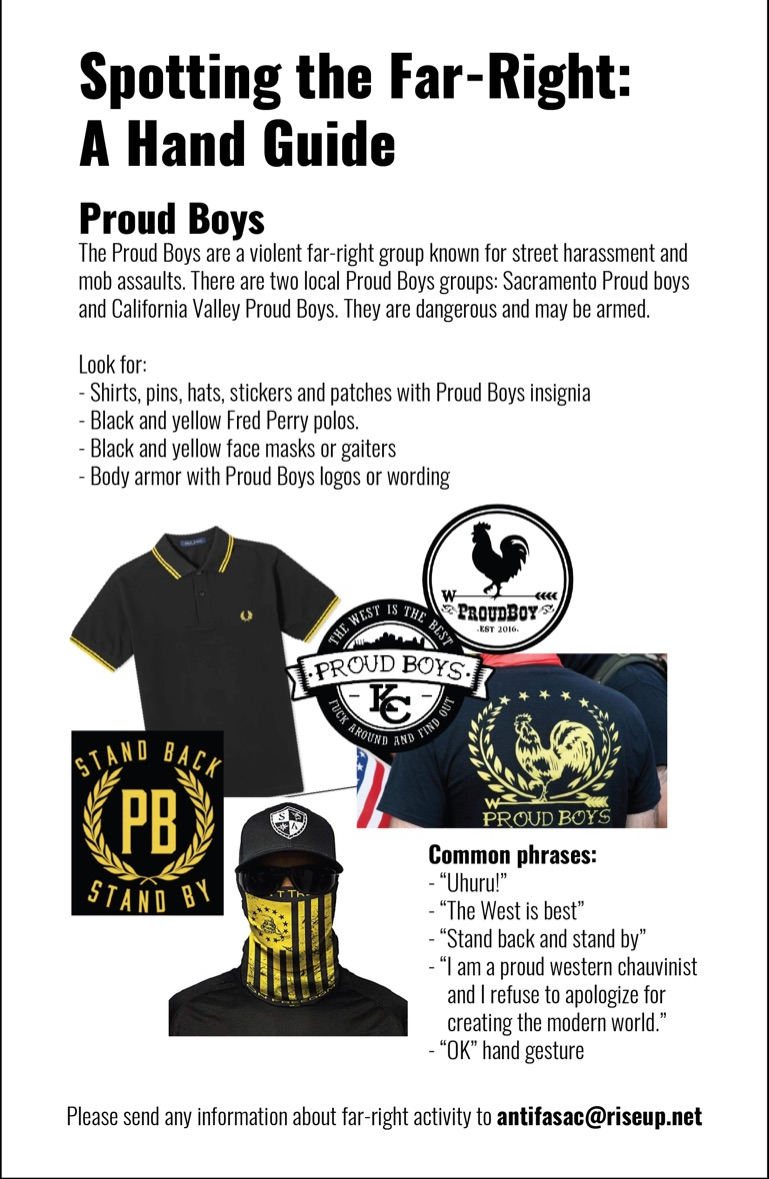 As a member of the Proud Boys and an active participant in some of the group’s most abhorrent activities, Michael Staley should be considered a threat to the community. Those who may come in contact with him deserve to be informed for their safety, so please help us spread the word! The Proud Boys are not welcome in our communities, and they should not be able to live their lives uninterrupted while spewing bigotry and organizing toward violence and terror.

Recent photos of Michael Staley’s residence there in Galt –

If you have any additional information on Michael Lawrence Staley or his associates, please email us at: antifasac(at)riseup(dot)net.