The Proud Boys are a neo-fascist group with chapters all over the U.S, Canada, the UK and Australia. The group was started by Gavin McInnes in 2016 in the lead-up to the presidential election, but gained a lot more attention by spring of 2017 when they were becoming more active. That same spring Kyle Chapman ( aka based stickman ), a far-right Trump supporter from the bay area, started a group called Fraternal Order of the Alt-Knights (FOAK) and after an endorsement by McInnes it became known as the “tactical defense arm” of the Proud Boys. Later that year at the deadly white nationalist march in Charlottesvile, VA, FOAK marched among all the neo-nazi and white nationalist groups present that day in the face of hundreds of brave anti-racists. The march on Charlottesville itself was organized by Jason Kessler, a Proud Boy and a white nationalist. The rest of 2017 and into 2018 the Proud Boys continued their anti-Muslim, misogynistic rhetoric while joining far right demonstrations around the country.

In November 2018 the FBI announced that the Proud Boys are now a designated domestic terrorist group, but they later retracted that statement. However, that was too much for McInnes and at that point he attempted to cut ties with the group after everything running through him since its inception two years prior. Today the leader of the Proud Boys is Enrique Tarrio, from Florida who is one of the Proud Boys that marched in Charlottesville on August 12th, 2017.

Brandon Witte, who has been a member of the Proud Boys for at least two years, first came to our attention when we heard that he was arrested in September of 2017 at the end of ” free speech week “  in Berkeley. At the end of that  week he joined a far-right rally on the UC Berkeley campus that was organized by Patriot Prayer, a neo-fascist group from the pacific northwest. It was reported that day that Witte was arrested for “illegal possession of body armor” and was also charged with a probation violation. It was then that it became clear that he was one of the Sacramento area Proud Boys to pay closer attention to, considering what he was probably capable of. Granted all Proud Boys are concerning because of who they are and what they represent when they wear the black and gold polo shirt with the Proud Boys pin, but by then he was definitely of the core group we had decided to keep an eye on.  Earlier that same month, Brandon Witte went out to Berkeley along with other Proud Boys to attend a talk by far-right Islamophobe,and transphobe Ben Shapiro, that was being held at UC Berkeley just prior to the beginning of ” free speech week “ , a week of events organized by different members of the far-right.

The following spring on March 7th 2018 hundreds of anti-racist protesters were out in front of the Kimpton Sawyer hotel in downtown Sacramento where the then U.S attorney general was giving a speech in front of the California Peace Officers Association, justifying the administrations anti-immigration policies. A small group of far-right people went downtown to try and harass the large group protesting the racist Jeff Sessions’ appearance in Sacramento. Among the small group of far-right people present that day was local neo-Nazi, Chris Locke, who was doing the Nazi salute and hurling racial slurs at some of the protesters, as well as white nationalist street harasser, Jeffrey Perrine. Brandon Witte was also there wearing a  ” blue lives matter ” flag as a cape the entire time which of course is an anti-black racist symbol in and of itself.

It’s interesting that Witte chose to support the Westboro Baptist Church that day because in a snapchat conversation back in December of 2015 he was showing his appreciation for the Ku Klux Klan (KKK) kicking the Westboro Baptist Church out when they would protest a military funeral. Of course it’s also possible that even three years later in May of 2018 he could be choosing when he’d support the WBC and when he won’t, but clearly he’s also ready to support the KKK as well.

In these last two years the Sacramento area Proud Boys once lead by Gabriel Morris Silva of Glencoe have become more disjointed then they once were, but even among the splits and fractures they are all still concerning in their own right. They just aren’t as organized as they once were, but they still have their numbers and among those where there isn’t much friction they will coalesce at times.

Well, back on April 17th of this year, Witte went out to Berkeley yet again with a group of Proud Boys to attend a speech given by the former White House press secretary, Sean Spicer. Afterwards he and other far-right people were seen at Eureka, a restaurant in Berkeley. At that point a call-in campaign was issued by Berkeley Antifa demanding to know why Eureka would serve Proud Boys, fascists, and other far-right people. A great tactic to use when dangers to our community like Brandon Witte are seen heading into a bar, restaurant, or any public establishment.

Most recently on August 22nd of this year when Bernie Sanders was giving a speech at Cesar Chavez park, Witte was again spotted among at least 7 Proud Boys in a group of at least 15 far-right people there to harass the attendees at the Bernie Sanders rally. 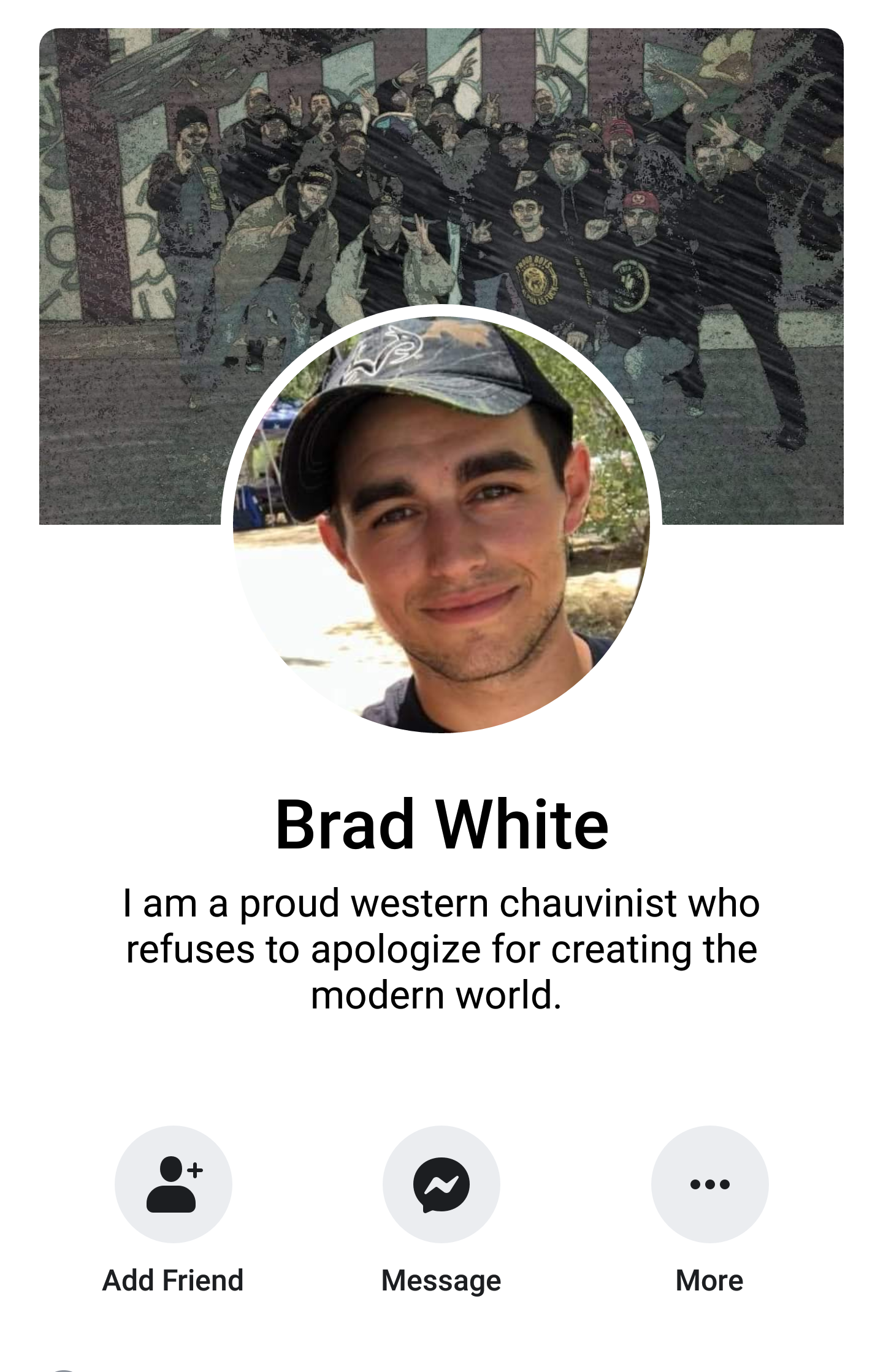 If you have any information about Brandon Witte or any other Proud Boys in the area, please contact us at:   antifasac ( at )riseup.net

By the end of the summer of 1999, Sacramento had experienced arson attacks at three synagogues in a single night in the month of June and then an arson attack at a women’s health center where abortions were provided in July. Not long after the women’s health center attack, the news came out that those responsible for the the four arson attacks were also responsible for the murder of a gay couple up in the Redding area. At each synagogue that was attacked, literature was left behind for the World Church of the Creator, a white supremacist group that is now known as Creativity. When the brothers Benjamin and James Williams were arrested for the attacks, literature for the World Church of the Creator was also found in their house. Shortly after the double murder in Redding, a member of World Church of the Creator, Benjamin Nathaniel Smith, went on a shooting spree in Indiana and Illinois targeting marginalized individuals, leaving 2 people dead and 10 injured before killing himself. From the Midwest to California the consumption of white supremacist material was fueling such heinous acts as the ones done by the Williams brothers and Smith.
Well, only a month later on August 10th Buford Furrow walked into a Los Angeles Jewish Community Center and fired off 70 rounds, injuring 5 and killing a mail carrier after escaping the Community Center. Furrow was a member of Aryan Nations, a white supremacist organization that is now defunct and he is serving two life sentences in federal prison.
The firebombings, committed by brothers Benjamin Matthew Williams and James Tyler Williams of Redding, CA, caused nearly $1 million in damages to B’nai Israel, significantly damaged Beth Shalom, and the Knesset Israel Torah Center. All three Synagogues remain standing to this day despite the arson, clearly a testament to their perseverance in the face of white supremacy.
The Williams brothers were eventually arrested as they left a Yuba City shopping mall on July 7th of 1999 for the murders of Gary Matson and Winfield Mowder, a gay couple who lived in Redding.
By early 1999 the two brothers were completely radicalized and entrenched in white supremacist and anti-Semitic beliefs and ideologies. Although it was the older brother, Benjamin Williams through being stationed in Washington during his brief stint in the Navy, later living in Idaho and ultimately joining the Montana militia in 1998 that was the great influence on his younger brother. Benjamin had become immersed in white supremacist literature and websites he found along the way prior to heading out to Montana briefly and coming back home to collaborate with James. Clearly a lot of  Christian Identity and white supremacist groups had shaped the positions he took; one of them being the National Alliance(NA).
The Sacramento Bee had cited unnamed federal sources as having found a letter from Benjamin Williams to National Alliance head William Pierce when searching his home.  William Pierce who died in July of 2002 not only founded the NA but is also the author of the Turner Diaries ,a coveted novel by white supremacists like Atomwaffen Division of today, or Timothy McVeigh, the individual responsible for the Oklahoma City bombing in 1995.
It soon came out that the Williams brothers  were also responsible for the arson of a women’s health clinic in the Sacramento area, Choice Medical Center, which took place the night before the double-murder, and the arson of the 3 synagogues as well. James Williams, the younger brother, was sentenced to 29 to life in California state court for the murders after already being sentenced to 21 years in federal court for the 4 arson. He is currently not far from here at Mule Creek state prison. Benjamin Williams killed himself in Shasta county jail in November of 2002 while facing charges related to the double-murder.
Many parallels can be drawn between the actions in 1999 and the activities of white supremacists today. In 2017, local neo-Nazi Chris Alden Locke began stalking and harassing a women’s health clinic in Sacramento, culminating in a break-in and vandalism at the location. A few months later, Golden State Skins member William Planer vandalized a Synagogue in Colorado and eventually was caught for it and extradited to Sacramento to face charges from an assault that occurred at the Nazi shut down in 2016. That same year, a Synagogue in Orangevale, CA, was similarly attacked where racist and anti-Semitic flyers were affixed to the outside of the synagogue.
This is why, two decades later, we must continue to fight white supremacy, and continue to monitor and expose individuals who pose a threat to our community. We stay active and vigilant because we know that the potential for another attack is always there.
When we think of what occurred in the summer of 1999, we also think of the recent deadly attacks against Synagogues in southern California and in Pittsburgh, Pennsylvania. Back in April of this year in Poway, CA a white supremacist walked into a synagogue, opened fire and injured three and murdered one before his gun jammed. In October of 2018 in Pittsburgh a white supremacist just the same walked into the Tree of Life synagogue and started shooting, killing 11 people and injuring 6. As the end of the summer draws near and we think about what happened 20 years ago we express our solidarity with the Jewish community of the Sacramento area and around the world, as well as all marginalized communities that are targeted by white supremacists. We remember those we have lost, and we will keep on fighting.